One of my big 'claim-to fame's was that I saw Kate Bush live at the London Palladium during her only tour.  To be honest I don't remember that much about it - what I remember the most is that I was up in the Upper Circle and it's steepness gave me the feeling of being a mountain goat.  I also remember vaguely liking it but also being aware that it's reliance on mime trops played up the worst in the young Kate - that slightly tragic air of preciousness, the feeling of a 6th form girl being allowed the afternoon off lessons to prepare something artistic for the last day of term. 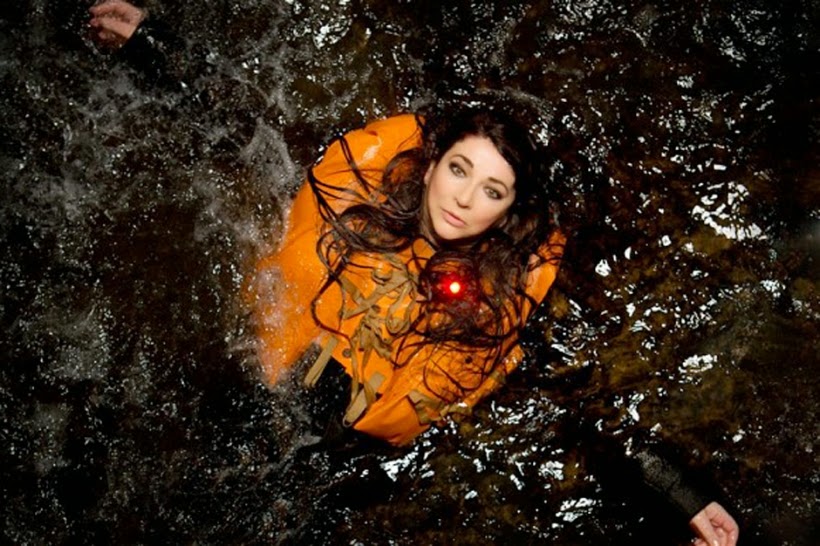 Since then I have bought her cds, some I have kept and loved, some I have dispensed with.  Around the turn of the naughties, I fell in with a particularly manic clutch of Bush fans and their constant whining about when will she release an album quite turned me off her so I didn't really pay any attention to her 'comeback' ARIEL.  Needless to say, when ARIEL was released, these fans started on about "when do you think she will release her next album".  After passing through them, I was ready to be interested in her again when she released her hypnotic album 50 WORDS FOR SNOW.

The shock of the announced residency at Hammersmith Odeon (as it always will be) gave way to the anxiety of could tickets be booked.  Of course they could thanks to Owen's super-fast clicky finger!  Then the long wait to the actual night of the show BEFORE THE DAWN...  which finally came last Friday. 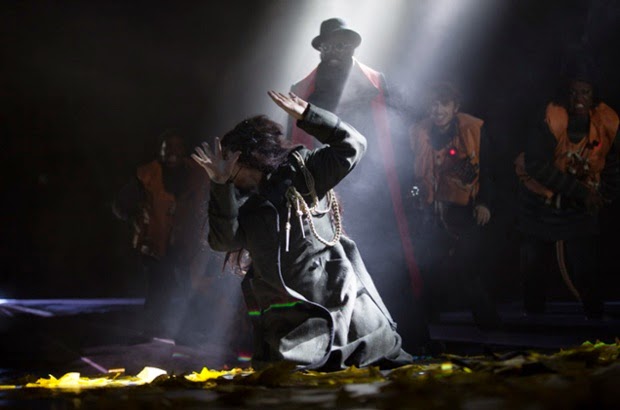 Thanks to the stage being extended, our tickets went from being 8 rows from the stage to 4!!  Taking our seats after the very polite but vaguely irritating scrum at one of the merchandise stands and seeing how close we were to the stage was when the excitement kicked in.  We also started to ask a burning question... how would she actually get on stage? Walk on? Fly on? Bounce up through a trapdoor?

The answer came soon enough... when the onstage musicians launched into LILY and from stage left on came Kate, shuffling on in rhythm to the music and leading her onstage singers behind her - and it was, you know, it was Kate Bush. I'd know that face anywhere - and I would know her voice anywhere too.  The news that she was not singing anything from the first four albums suggested a diminishing in vocal range but she sounded great, her head and chest voice were superb and had real power.  Her fuller figure might have compromised her dancing but vocally she was excellent. 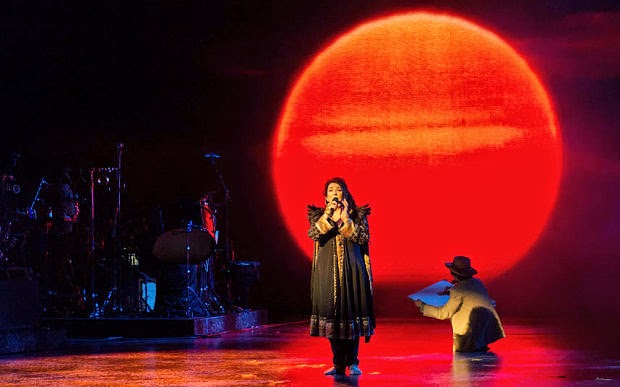 If she had just played the first section I would have been happy as that segment with Kate, band and the backing singers gave us - finally live on stage - HOUNDS OF LOVE and RUNNING UP THAT HILL.  To see her sing those was worth the price of the ticket alone.

After RUNNING UP THAT HILL it seemed natural to lead into KING OF THE MOUNTAIN but as that song built in clamorous intensity, certain elements of the stage set began to shift, the band's risers retreated to the back of the stage - and two onstage cannons shot a ton of small parchments into the auditorium on which were written the lines of Tennyson which inspired her song cycle THE NINTH WAVE. 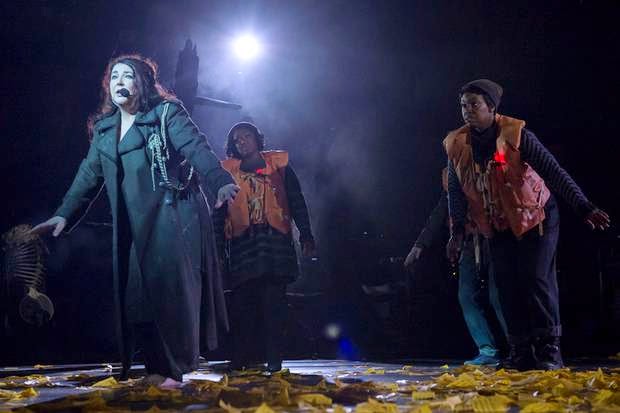 Utilising all the Hammersmith stage - and auditorium - we were given a visual interpretation of that collection of songs starting with footage of Kate floating in the ocean wearing her life jacket for DREAM OF SHEEP which led into a full theatrical show with billowing material as the sea, the singers as sea rescuers and bone-headed fishmen fighting for possession of the hapless shipwreck survivor and an impressive lighting gantry/rescue helicopter that hovered over the audience, it's searchlight sweeping across the auditorium culminating in an onstage buoy for the woman to be rescued - or was she?

It was all fabulously imaginative and all achieved with a remarkable simplicity, wonderful but for one clunking mis-step.  Step forward 16 year old Albert McIntosh, billed as 'creative advisor' for the show, wannabe actor/singer... oh and the son of a certain K. Bush.  He popped up in an interminable scene between the lost woman's husband and son leading up to an appearance on the cramped box set of a ghostly Kate singing WATCHING YOU WITHOUT ME.  It was Amateur Hour in Dixie writ large and it stopped the momentum of the piece dead. 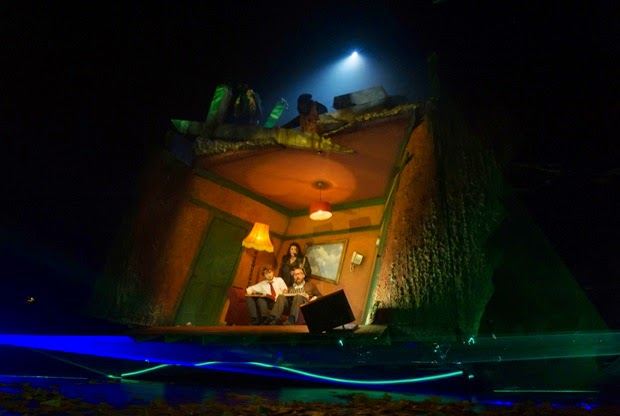 After an interval that found a good percentage of the audience on their hands and knees at the front of the stalls scooping up handfuls of Tennyson verse - we had ours that had landed on us tucked safely away - it was time for the second half, ARIEL'S song cycle A SKY OF HONEY.  Now Constant Reader, you will remember that I was very off Kate at the time of that album's release so I had no expectations, I just sat back and watched the spectacle.

I was not as engaged as I was for THE NINTH WAVE - a combination of unfamiliarity with the material, a noticeable lack of choons (apart from what appeared to be Kate's version of LA ISLA BONITA) and the return appearance of son Bertie, this time in a larger role as a painter.  Dear God, he even had a solo.  Yeesh I don't think even Barbra Streisand allows Jason Gould that!  But it ended with a deliriously insane climax of Kate taunting her guitarist - everyone by now had bird skull masks on - and eventually, after an initial blackout, she seemed to fly. 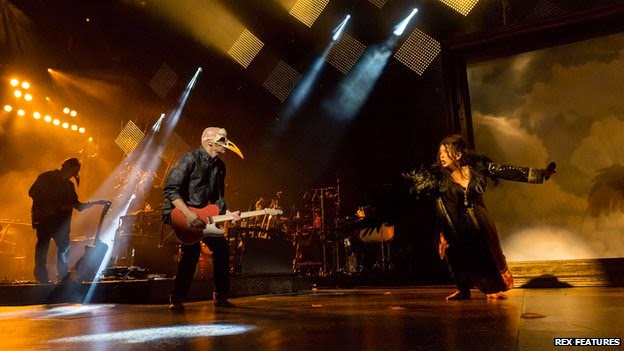 The show however ended finally with Kate alone at the piano singing the haunting AMONG ANGELS from her last album and the last song was a massive, rousing-sing-a-long version of CLOUDBUSTING.  And then, her thank you's barely heard over the huge loving ovation she was receiving, she was gone with a smile and a wave.

It was only after the lights came up that I realised that the odd feeling I was experiencing was due to the fact that while she had been onstage I had been smiling the whole time.  It was such a joyous experience to see her, seeming so happy and contented to be sharing her work finally with her enraptured fans that it was impossible not to surrender to her. 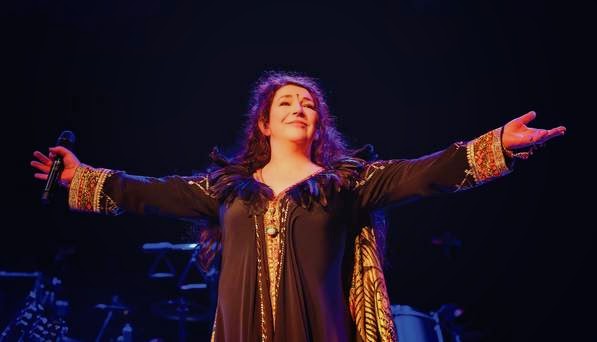 It was magical, uplifting, disturbing, haunting, touching - and maybe a little puzzling.

I was lucky to see Kate's show. I flew over from Toronto. Thousands of dollars spent to see this unforgettable experience. I crawled the aisle to obtain my Tennyson confetti. Note: it's "Cloudbusting", not Cloudbursting.